This is a write-up of a HackTheBox machine named Craft. 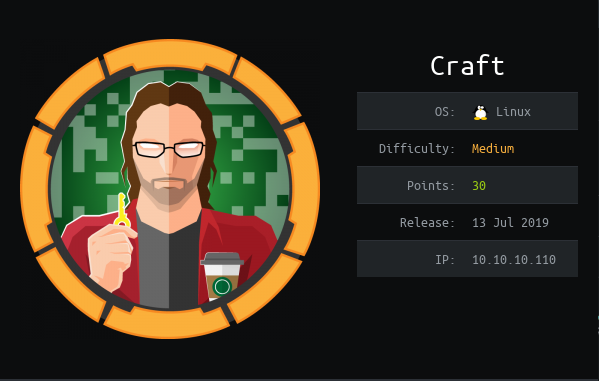 First thing was to discover open ports on the server:

I usually scan more than just default nmap’s most popular ports and this time it gave me 6022 open. It appeared to be another SSH open port, but seemed to accept only clients using private-public keys, so I left it for now.

So let’s explore that usual 443 port. In the browser I had to type https://10.10.10.110 which gave me an alert about self-signed certificate of the website owner. The certificate was issued to craft.htb. Continuing, site below has appeared: 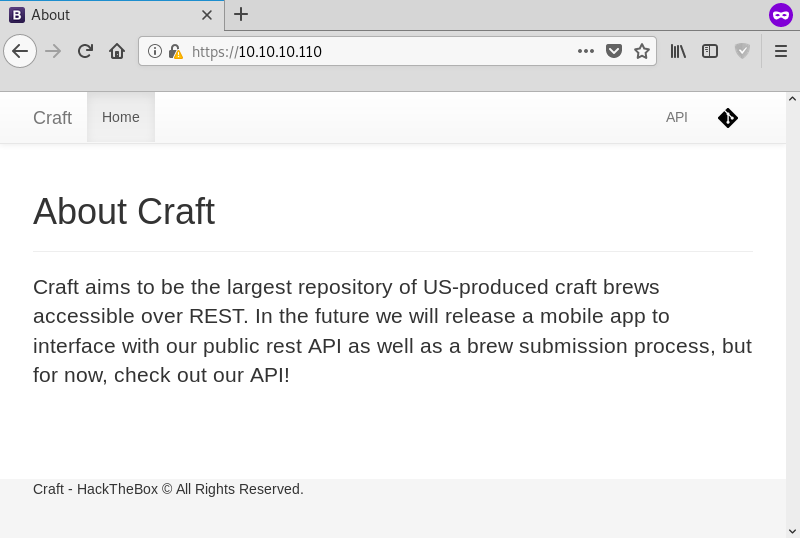 The site itself doesn’t contain any CTF-content, like hidden HTML, minified JS files or anything like that. But there are 2 interesting links at the top right: to self-hosted git repository using Gogs and to API documentation built with Swagger.

I accessed main website at https://10.10.10.110. Links to Gogs and API were https://gogs.craft.htb and https://api.craft.htb/api respectively. They all pointed to the same IP address, so I had to switch from IP-based name to “real” hostnames. My default settings didn’t resolve https://craft.htb nor any of above hostnames after setting primary DNS server to HTB’s default gateway. So I just entered the following in my /etc/hosts file:

and was ready to access API and Gogs repo.

First I checked the code, to see what do I deal with. It was a Python API written in Flask framework, using MySQL database. It has one issue open (plus 1 closed, but nothing interesting inside), which caught my most attention: 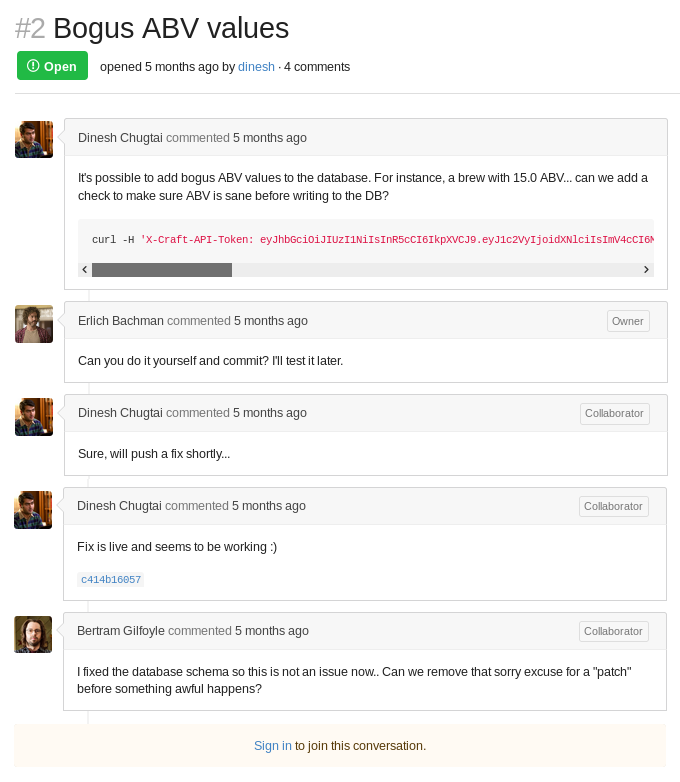 Dinesh found out there was no verification of input values when using API. He was proposed to do a fix himself, which he did in a commit:

Not sure if you can call this a “fix”, but good for me. Python’s eval function using straight user input, no verification. The API endpoint is decorated with @auth.auth_required function though, and looking at the code of auth mechanism, there is no other way than to normally authenticate, with login and password.

First thought: use token that Dinesh pasted in git issue. Using a routing from an API documentation, it is possible to check validity of a token. You do it this way:

This one looks good. Let’s check inside:

Nice. Dinesh must have had a bad day. Those credentials allowed me to authenticate using Swagger API docs, where I got a new token. This time doing curl with the token, API returned:

I’m not sure if there was a time-validity of the token or it was expiring when too many users authenticated, but it was happening really often. I was using curl mostly in this task, so I wrote a script that was requesting new token, extracting it from response and setting as environment variable in my bash. Then I was appending the token using variable substitution to my curl requests. Code below:

and from here I could forget about annoying token invalidation, using just:

Now let’s get back to the eval vulnerability found earlier. It can only be triggered with a following JSON request body:

Now, it doesn’t matter whether eval("%s > 1") will finally evaluate to True. We don’t need to insert anything malicious into the database (as per git issue, it is probably fixed anyway), it’s enough to just execute some function. How to check if it actually works?

My first try was to use some request bin - force eval to execute HTTP request to an address I control and check if the request has reached the target. This would mean my base payload works correctly. In JSON payload above I typed this:

which is false, but we don’t care - the request was sent and I can confirm it on my request bin. Later on I found some requests are sent to the remote and some not, so expecting external connectivity issues I just set up my own simple HTTP server and substitute the url as http://10.10.15.xxx (my IP assigned by the VPN). Works great, but remember not to run this on your everyday computer, start up a VM to do this kind of things, because now everyone inside this network (basically most HTB users) can query your server.

But using urllib from inside Python is rather useless, I’d like to do some OS actions. I did:

No luck, no sign of a request in the bin. Maybe there is no curl? How about this:

and finally upgrading the shell with python -c 'import pty; pty.spawn("/bin/ash")' (yes, there was no bash on the host). But searching and grepping, I couldn’t find nothing spectacular and none of the flag files at all (those should be “user.txt” in user home dir and “root.txt” in root’s dir). There was even no user’s home dir and root’s dir was empty except for .cache and .ash_history. Trying to execute whoami returned “root”. I even tried to change root’s password using echo \"root:asdf\" | chpasswd, so I could ssh into it, but ssh wouldn’t let me in. I used find / -iname *.txt to check if flags are somewhere else, but nope. So I started to search using ls -a, starting from / dir. Except from usual folders in there, there was an empty file called .dockerenv. And then I realized: it all makes sense - I’m inside Docker container. Maybe the task is to jump out of the container to host fs?

Now recall there was a MySQL DB attached to the Flask app. I opened up Python script for database testing and adjusted it a bit. Somehow system couldn’t resolve Docker “db” hostname to the database address, so using arp -a command I found IP of the container in Docker network:

Great, more creds. First I tried using all of them to log in with ssh to 10.10.10.110, with no luck. Then I remembered gilfoyle had some commits on the repo, so maybe he has an account too? 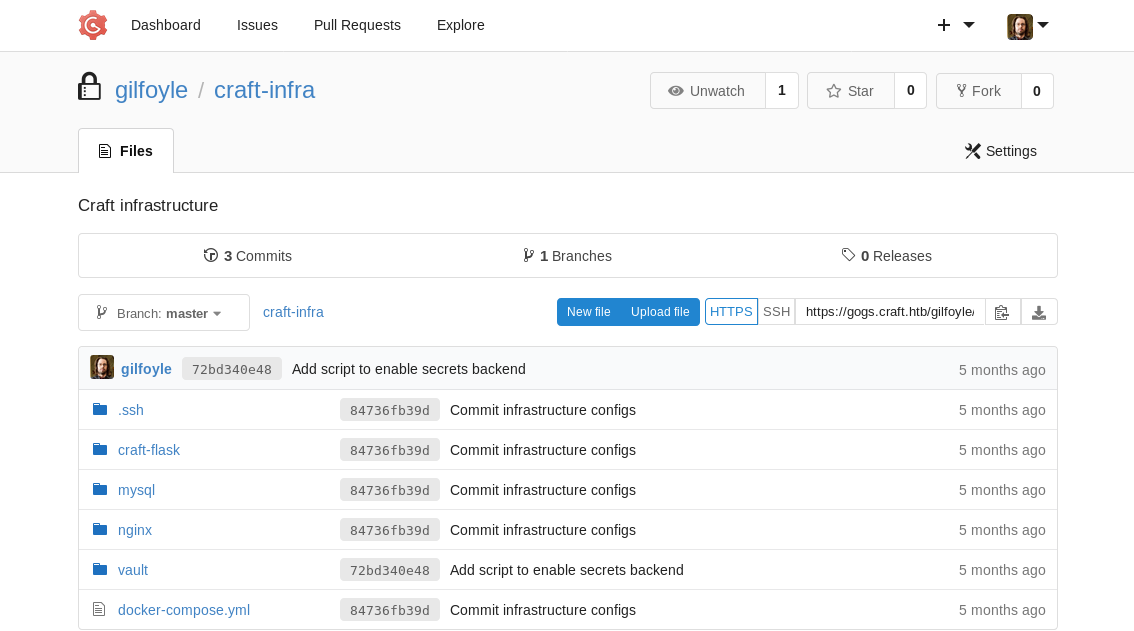 sure he has, miserable password reuser. This repo contained Docker Compose code for an entire app along with DB, Nginx, and (what I didn’t know before) - Vault, an application for storing secrets. And another folder, called .ssh, and yes, there was a private and public key of gilfoyle. 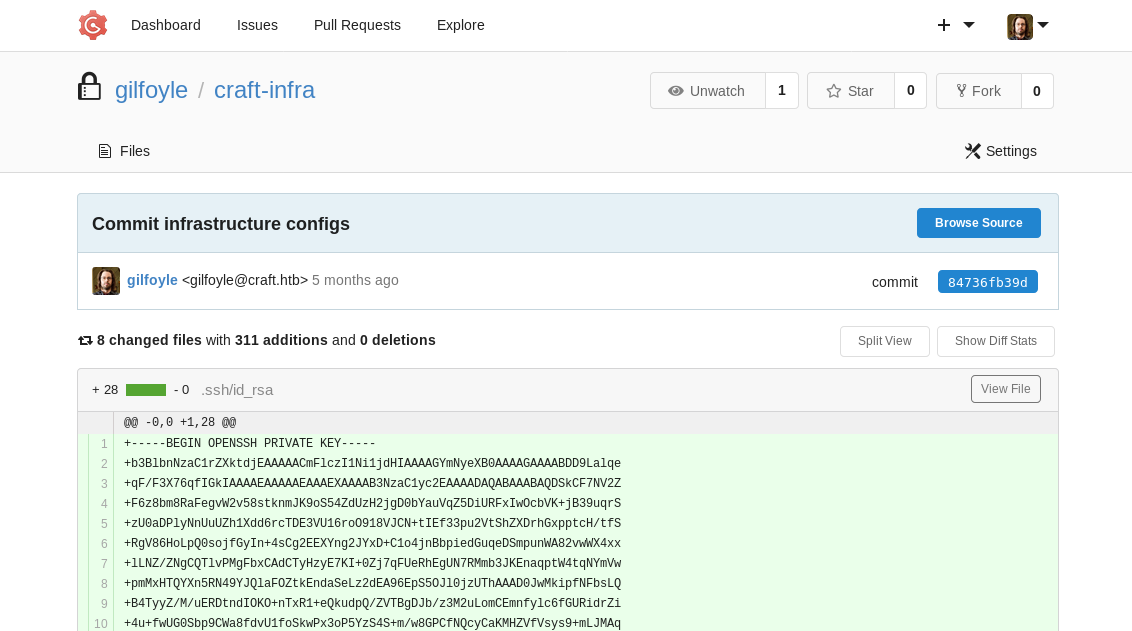 I copied content of both to ~/.ssh/id_hack and id_hack.pub on my machine and ran:

this greeted my with an SSH passphrase prompt. I wasn’t surprised seeing that he reused again the same password. At this time I was in home folder on the application host server and had the user flag.

This was expected. But since Docker is installed on the machine, maybe someone conveniently added docker user to sudo group? Well, no. First of all there is no sudo on this machine, and if there was one, trying to run Docker mounting root fs to the container didn’t work:

Previously in repo there was Vault config. Maybe Vault stores some root password and I have access there or something? This was “secrets.sh” script from “vault” folder in repo, that caught my attention:

I don’t have much experience with Vault, but this is a command that specifies SSH access to the machine using one-time passwords. Well, let’s try to use it with helpful documentation:

The prompt asked to retype OTP password and just let me in. I got logged into the machine as root and typed the long awaited command:

Many thanks to user @rotarydrone for creating this machine. I think it shows real-life examples of what you should not do, but what happens often: